This second issue picks up at the same place we left Ben and Snoke in issue 1. The pair are walking through Snoke’s garden while Ben plots his next move. The intimacy of the scenes with Ben and Snoke is very telling. There is definite nudging of Ben but it’s also clear that Ben is extremely angry.

It simmers to the surface with the simplest turn of phrase.  When Snoke mentions that the name Ben Solo might be welcomed by the Knights of Ren, his protogé erupts. Ben hates his name and readers learn that he is well aware that Solo was NOT Han’s true name. While Ben reflects on how to reach out to the Knights we get a flashback story of Ben, Luke, and Lor San Tekka meeting the Knights for the first time.

What We Learned In Star Wars: Allegiance 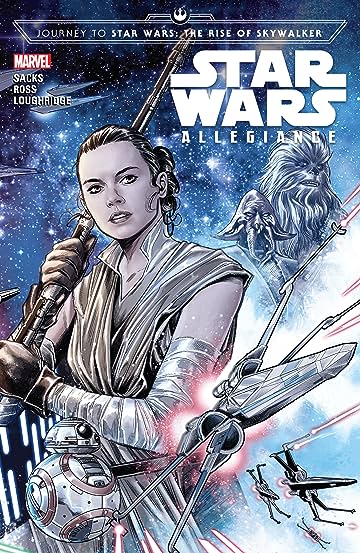 Since the new canon took effect in 2015 it has awarded the Star Wars franchise a very unique opportunity. Starting with The Force Awakens a series of books and comics have been released giving information about the events and characters in the upcoming films. I have loved reading all the stories and began collecting them.

The Representation of Dr. Aphra

Months before The Force Awakens premiered, Asian representation in Star Wars took a major stride forward outside the entrance to a massive armory with multiple blasters leveled at a rogue archaeologist.  Her name was Dr. Chelli Lona Aphra and all she wanted to do was liberate weapons of mass destruction from a dust collecting fate.  Aphra, as her many fans reference her, was introduced in Marvel’s Darth Vader no. 3, written by Kieron Gillen and illustrated by Salvadore Larocca, as a soon to be henchwoman for the eponymous Dark Lord of the Sith for the twenty-five issue run of the series.  Envisioned as an amoral mirror of Indiana Jones, Aphra was drawn as an identifiable Asian woman, representing one of the first times in the current canon that someone of that community was presented as part of the Star Wars universe.