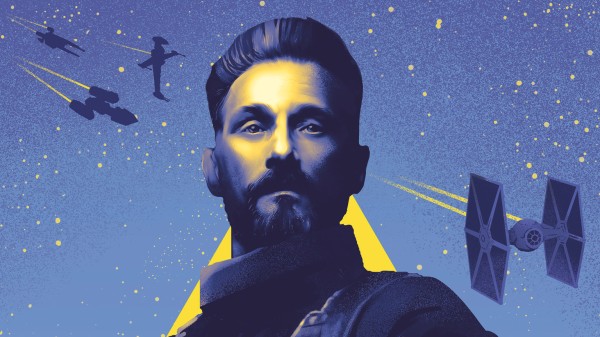 Alexander Freed’s Alphabet Squadron trilogy concludes with Victory’s Price, the latest addition to the line of Star Wars novels filling in the gaps between the events of the films. The series has been a fantastic look at the complexities of fighting during the tail-end of a war, with characters from each side questioning their past and present decisions.

Freed doesn’t hold back from focusing on the fact that fighting from spaceships just complicates things even more- creating a disconnectedness that causes a conflict of emotions in each character. Fighting on the ground makes war intensely personal. So what about an ongoing war fought in space where you may never even see the face of your enemy? Yrica Quell is one of the best examples of this struggle because of her history with the Empire.

Her involvement with Operation Cinder was both an active decision and an emotional break with her status quo afterward. It’s a defining moment that resulted in her helping the New Republic. This makes the idea of her going back to the Empire so believable to those still a part of the remnants. The beauty of Yrica’s story arc, of course, is that she has grown as a character. She is using her past and how people view her (even in negative ways) to help the New Republic at the detriment to her own life and standing with her now ex-squadron.

Just like the two previous novels, each character has a chance to shine and display their emotional journeys throughout the story. Hera Syndulla still has a large role in this novel as a mentor and guiding force, which makes it fantastic to see her role expanded in the Star Wars lore. All of the squadron members- Chass, Kairos, Wyl and Nath-are trying to balance their job while also making sense of what they believe is a betrayal by Yrica. Having the plot unfold with the heroes not knowing the full truth is both tragic and tense, making one want to jump into the pages of the book and tell them everything so they can work as a team again. For that alone, Freed excels in creating a compelling plot.

While the first two novels dealt more with forming the squadron and then facing an opposing team, the final chapter highlights each character defining themselves. Though each of the heroes may have been defined by their trauma and pain at the start, it’s satisfying to see them break past that into a new phase of who they are. In a larger story about New Republic pilots forming a crack team to take down the remnants of the Empire, Victory’s Price is the Avengers: Endgame of the trilogy. Shadow Wing is a menacing threat that is willing to destroy and kill just for the sake of it. They encompass everything evil about the Empire, and the Alphabet Squadron is the quintessential team to embody the spirit of rebellion. Freed hits a home run with this final installment and keeps the question asked- what is the price of victory?

Get your copy now!

Following the events of the first novel, Alphabet Squadron, author Alexander Freed takes readers deeper into the minds of the New Republic’s secret fighter squad in Shadow Fall. The rivalry between the Alphabet Squad and the Imperial remnant’s “Shadow Wing” is at the center of the story and drives each character on their journey.

While the first novel focused on setting up the timeline, characters and circumstances, this follow up allows a more character driven entry into the series. Juggling an ensemble of characters that are completely new to readers is not an easy task. There is something refreshing about finishing that introduction and getting to know each of them individually, and this novel does just that.

As leader of the squad, Yrica Quell is probably the character readers have gotten to know the most, and yet who becomes more complex the more information is revealed. Author Alexander Freed takes a very grounded approach to the inner workings of Quell’s mental and emotional state following the events of the first novel, in addition to the course of her life that brought her to the present. While dealing with guilt, anger, fear, and a lot of denial, Quell is trying to figure out how to be a leader and check in on her team. This is incredibly difficult when she’s not taking proper care of herself, and there remains the lingering secret of her involvement with Operation Cinder still hanging above her head. It’s also noted, as she opens up to an IT-O interrogator droid, that one of the moments that shaped her was her involvement with another female who had left the Empire while Quell had stayed. While this is a moment that is pivotal in helping explain Quell’s character and adds another layer to who she is, it’s worth nothing that it’s not used as a commodity. The big reveal is that Quell was in love at all, and had decided to stay where she was under Imperial service- not who she was involved with. This not only adds a more diverse and inclusive element to the Star Wars universe, but does so seamlessly.

Chass na Chadic, known to have a love of action and a lack of trust in others also gets a deeper backstory. We discover her past involvement with a cult that seemingly said all the right things but manipulated and controlled their members. When she finds herself stranded in the middle of another cult with a member of Shadow Wing, things get very complicated. Kairos is aloof as always, hiding her true appearance, and with a determined taste for fighting. Yrica is even tasked with a heads up to check in on her team, especially the enigma Kairos. Her connection with Caern Adan is a strong one, as he is the one who recruited her, as is her fierce determination to take down Shadow Wing.

Wyl Lark and Nath Tensent remain on the heels of Shadow Wing, measuring out a plan of taking them on the ground before they can get their ships in air. Both struggle with learning how to lead, and the uncertainty of the fates of their teammates who they lose contact with as the story progresses. Their struggle is a fantastic look at a journey from angry recruit to determined (albeit unwilling) leader. War is not without losses, and the author does a wonderful job of putting the reader in the heads of each character and how they are viewing everything around them: wins, losses, death, uncertainty.

Freed also gives an insight into the enemy, giving readers the viewpoint of Soran Keize, who is helping lead Shadow Wing. Hearing a villain’s perspective on events is always interesting, but even more so when it comes to war. On the one hand, the reader can almost understand why they feel the way they do, but it falls apart when set against the atrocities their side
has committed. Yet, it still feels genuine not a caricature of a “bad guy.” While reading the thoughts inside Soran’s head, it’s easy to feel like this is a real person in the world.

Shadow Fall is a perfect follow up in the Alphabet Squadron series and follows the tradition of Star Wars sequels. The characters are seperated, in dire circumstances, and the villains are hitting back as hard as they can. If Alphabet Squadron was a taste of the world being created, then this novel is the main course. With characters who feel like people that have crossed your path in real life, Shadow Fall will have you questioning the same complexities of life that they do, and coming out even stronger for it.

Click here to learn how to buy a copy of Star Wars: Shadow Fall by Alexander freed!