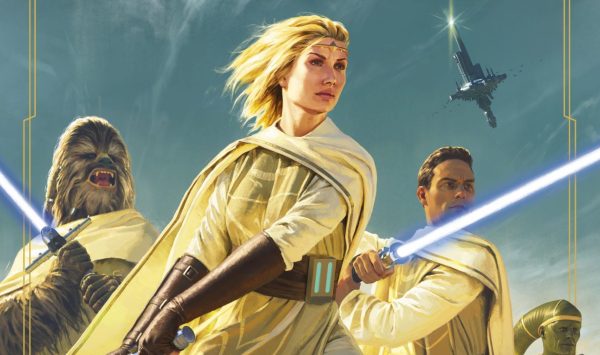 Star Wars: The High Republic – Light of the Jedi
by Charles Soule
Review by Matthew Boccia

When first hearing about the new series of projects that would focus on the High Republic era, there was excitement just for the chance to explore that portion of the Star Wars galaxy’s timeline. What was unknown, however, was how the Jedi would be portrayed in this era, and how closely connected they were with the Republic. Charles Soule not only answers this question in the novel The High Republic: Light of the Jedi, but also creates a very clear image of what the Jedi are supposed to be.

With so much Jedi related content amidst the Skywalker Saga, The Clone Wars, and even Rebels– it is very easy to take those snapshots of intense moments in the galaxy’s history as a full picture. The problem is that some of the earliest canon stories that exist about the Jedi only detail them at their height of confidence and being manipulated into a war, their fall and executions, and then their slow comeback. There has not even been an opportunity within the current canon to see what a new Jedi order looks like. All that’s really known is that Luke Skywalker was beginning to start a new order, and everything was destroyed, followed by some lessons from Yoda about the sacred texts and mistakes of the previous Jedi order. Yet- what about before the Clone Wars? What was it like when the Jedi were a large source of light and protection for the galaxy without as many political complexities? The High Republic seeks to provide answers.

The novels begins with a major emergency situation about to take place, and various characters being introduced during the crisis. What’s amazing here is that even with the onrush of new names, species, and dynamics- we get a real sense of what the Jedi are like during this time. They are focused on more spiritual, force-connected perspectives, only pulling out their lightsabers when given no other choice, seeking to protect an innocent. The image of what a Jedi is supposed to be is displayed in full effect, and it would even be safe to say that it takes more center stage that the oncoming threat itself. Though the circumstances and origins of the “emergence” that kicks off the story remain a mystery for a good while, the first event is wrapped up spectacularly. The miraculous abilities and possibilities that could be achieved by a large amount of Jedi- even from a distance, and working together- is incredible. The moments Soule creates rivals the final battle in Avengers: Endgame. The only drawback is that we just met these characters, so it’s not as gratifying of a moment, but it is touching just the same.

Avar Kriss, a human female Jedi, is one of the main characters readers follow throughout the story, and it’s easy to see why. She is a leader, intelligent, and strong in the force. Most of all, however, she is a prime example of the Jedi way.

Jedi Master Loden Greatstorm is a Rutian male Twi’lek who wields a yellow lightsaber, and though seen as wise and powerful, also has a sense of humor. His padawan, Bell Zettifar is a human male who befriends a charhound named Ember. The dynamic between master and apprentice here is wonderful, showing a determined yet reserved apprentice with an impulsive, ‘I’m going to jump off the ship now’ master, flipping the roles seen by fans before. It’s also worth noting that this is the first time in a very long time there is a lead Black character who is a Jedi, and we get to see him as an apprentice. While fans may be hoping for a story like this involving a well-known character such as Mace Windu, it’s an incredible thing to be filling out the galaxy with new stories and characters. This includes Keeve Trennis, a black female Jedi Knight, wielding a double-bladed green lightsaber, struggling with her confidence while walking alongside legends in the Jedi order.

The story and threat, going by the name of “The Nihil”, bring to mind some Star Wars Legends stories involving the Yuuzhan Vong in terms of the mystery and oncoming danger. However, there’s one thing Soule does a wonderful job reminding the reader and the Jedi protagonists- sometimes evil looks just a fellow child of the force, who for reasons of their own, have chosen to way of darkness. It doesn’t take a Sith to commit acts of evil, and that lessons makes itself loud and clear. The Great Sith War is briefly mentioned in the novel, possibly hinting at future stories that are yet to be added to the canon timeline. Exploring that era may eventually give new depth and meaning to the High Republic era, just as this era is doing for the prequel era. The biggest takeaway is that the idea of the Jedi order becoming stagnant, battle hungry, or soldiers is something that happened over hundreds of years of keeping the peace and then being manipulated while in a state of comfort and false security. Light of the Jedi shows the Jedi order at their height of heroism and being one with the force, reigniting faith in the light.

Purchase a copy of Charles Soule’s The High Republic: Light of the Jedi here!